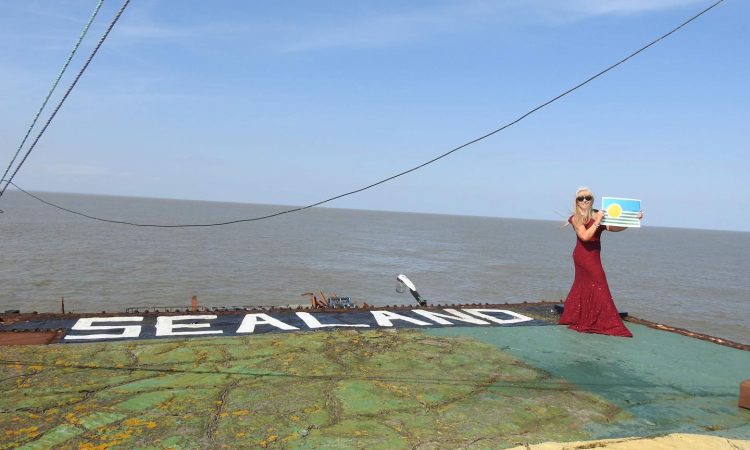 The story of when Islandia visited Sealand.

f you’ve made it to our website, but have somehow not heard of the Principality of Sealand, then I would be very surprised, but to summarize, when it comes to Micronations, new-nation projects, and gaining international recognition, Sealand are by far the benchmark the rest of us view success on.

What is the Principality of Sealand?

Sealand is based on a World War 2 Fort, formerly known as Roughs Tower. The fort was built (at the time) in international waters to guard against attack from Nazi Germany, and following the end of the war was left to rot. Then came Paddy Roy Bates

Mr Bates a World War2 veteran was particularly involved in the pirate radio scene of the time, a scene pushed onto the world by commercial radio stations refusing to play popular music. This led what would become Prince Roy Bates to Sealand and him deciding to declare the Principality.

In 1967 another pirate radio station owner tried to take Roughs Tower, which resulted in an armed confrontation and the eventual arrival of the Royal Navy. The case eventually made it to court, but as it had happened in international waters the court declared it had no jusristiction, which was seen, then and now as de-facto recognition. Sealand was born as a new nation, decades before the internet.

A rival group wh had previously been working with the Prince took over Sealand in 1978, including both German and Dutch nationals, holding the future leader of the nation Prince Michael hostage. A counter-attack was launched with the rightful owners taking back the fort and thus imprisoning the attackers.

This interestingly led to direct negations between the German government and Sealand, this led to the release of the captors, but also again -de-facto recognition by a second sovereign nation.

Sealand in the modern era

Since then Sealand has rarely been too far from the press, briefly hosting a huge private server, having its fake passports used for nefarious reasons and nowadays, much like ourselves selling titles.

They have also been represented many times at sporting events and it cannot be denied that though you may see their existence as grey, when it comes to Micronations they are by far the most interesting.

We have said right from the beginning that Sealand has been a huge factor in inspiring us to do what we want to do. We appreciate that we cannot just buy an island and immediately be a nation, but now that we have purchased Coffee Caye, we take enormous inspiration from what Sealand has achieved. As a private company we feel that we can achieve many of the aspects of statehood that Sealand has so far achieved.

Last year we made a very special lady a Duchess of Islandia, she was already a a Duchess of Sealand, so when you finally got to visit Sealand proudly displayed the flag of Islandia, a great moment for us, and the makings of a fabulous photo!

We also managed to display the flag of Sealand on our trip to Bir Tawil. That is a whole other story, but one you can read our book here.

Things are still early for the Principality of Islandia, but we hope that as our project moves forward we will hopefully enjoy cordial relations with our colleagues at Sealand.

It may be a crazy time in the world, but the future looks incredibly bright!