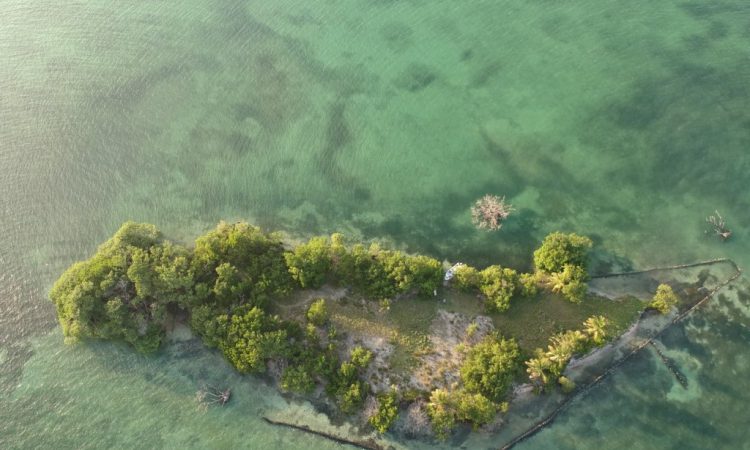 Just 9 km from Belize City by boat, only 15 minutes.

In Belize, the chance arose to visit not-yet-on-the-market Coffee Island. Of course we took up the opportunity.

The striking advantages of Coffee Island start with its proximity to a major international airport served by names like American Airlines, United, Copa, AeroMexico, Sun Country, Air Canada, Avianca, Southwest, and others. One can arrive at Coffee Island within an hour of leaving Belize City airport. The island can be seen in the distance from Belize City at 9 km away. On a good day, you can leave a city like New York City at 8am and be on your own private island by 2pm.

The boat was able to land directly on the beach without the need for a jetty.

You will see from the pictures that the island is surrounded for about a third of its perimeter on the north and eastern sides by ‘palmita’ stakes forming a low wall roughly between 3 and 8 meters offshore. These were probably erected to protect the island from erosion.

The northern part of the island is quite open, with palm trees, other shrubs, and grass. There are several small beachy areas, with sea grasses growing in the sheltered area inside the ‘palmita’ fence. The southern part of the island is more overgrown with mangroves. But there is plenty of buildable land: the property is more than 3 acres, with more than ¾ of an acre ready to build on today.

The island is almost completely flat, with ground level roughly 0.6 m above sea level. There is currently no development on the island.

1km to the south of Coffee Island is another, larger island with some minimal development. 10 km to the east is St George Caye, formerly a British military base, which is now partly abandoned but also has some fairly high-end properties in use. Beyond that is the coral reef which is around 12 km away. Further out to sea, due east of the island, is the famous Blue Hole. This would take about an hour to get to from Coffee Island, which is a little quicker than any tours that leave from the mainland.

The island at present is about 1.5 acres (0.61 hectares) of titled land. Another 66 feet (30 meters) of setback in every direction belongs to the government, but is effectively available for use (no permanent structures without proper permits). All in, the land can be as large as 3 acres. Included in the sale is the space out to the palmita fence, and beyond, which we could back fill with dredged material to increase the space available to about 3 acres.